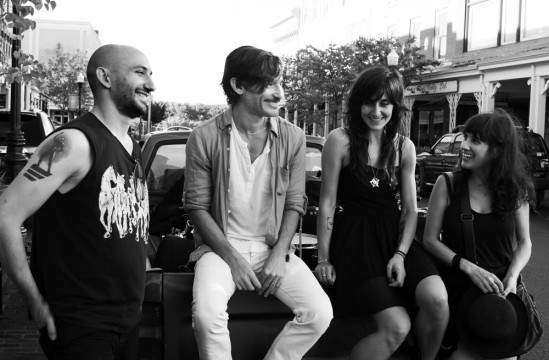 Led by ex-Mercury Rev’r Jason Sebastian Russo, the Brooklyn-based band, who supported Daniel Johnston at SXSW last year, started to sow the seeds for the record whilst on their 2011 tour of the UK in support of their debut album (There Is A Mountain). In between putting together a sweet split-screen intraview for us (see here), the band decamped to Neil Halstead’s seaside studio where they found themselves augmenting their huge collection of field recordings (and learning to surf).

The band have made a strange video for their song Boxers which we are delighted to exclusively premiere here. The video is a collaboration with artist Dani Leventhal. Jason says: “Dani and I met many years ago in upstate New York. She was cooking roadkill and serving it to people as an art piece. We pretty much became friends immediately. It took about a decade before we actually made something together. I’m a huge fan of her work. All of the Common Prayer videos centre around my family and the environment they cultivate up in the Hudson Valley and one day Dani and I went up there with a camera. I couldn’t think of a better person to grasp the scenario. Over the course of a couple of shoots she became pretty close with my brother and sister. Something about trying to film a boxing match in pitch black on top of a garbage dump really brings people together.”